Introduction and Discovery
Patricia recently volunteered to be Chairperson of the Heraldry Committee at her local Chapter of Colonial Dames 17th Century. She soon learned Heraldry is a significant aspect of the society’s mission and having an approved Coat of Arms is an important part of their record-keeping.

While looking at a list of Colonists with approved Coats of Arms, we surprisingly discovered two of her ancestors were included: Aldert Hymans Roosa and his wife Wyntje Ariens de Jongh. To emphasize, in addition to the Roosa shield there is a separate one for Wyntje! Apparently, a Coat of Arms allowed a person the right to bear arms.

Aldert Hymans Roosa is the ancestor of the Roosa family in America. He and his wife Wyntje were born in Herwynen, Gilderland, Netherlands circa 1621 and 1623, respectively. They married about 1642 and with daring and their eight children, came to New Netherlands in 1660 on the ship De Bonte Koe (Spotted Cow), initially settling in Wiltwick/Esopus (now Kingston, NY) where he became a prominent and sometimes controversial citizen.

Roosa was an agriculturist and a wealthy man for those days, bringing with him considerable property from Holland, and he speedily occupied an influential position in the new settlement. For example, Aldert’s name appears with that of his son Arien Albertson Roosa, Louys Du Bois, and others to petition Sir Edmund Andros, Governor of New York, praying that he would assist them in procuring a minister for Esopus, “that can preache boitthe Inglish and Dutche which will be most fitting for this place, it being in its minority.” This effort was successful for on December 25, 1660, Aldert and Wyntje participated in the first administration of the Lord’s Supper given by the Rev. Harmanus Bloem, who had been called as the regular pastor of the Dutch Church at Wiltwyck. In the spring of 1661, Aldert joined in a contract guaranteeing a salary to Rev. Bloem.

In 1662, Roosa was appointed one of three commissioners to enclose the new village at the Esopus, called Nieuw Dorp (now Hurley). At the destruction of this village on June 7, 1663 “by the Indians,” two Roosa children were taken captive along with 43 other women and children.

Rebellion and Reprieve
It seems Aldert was not receptive of the emerging British influence and in 1667 he joined with Cornelis Barentsen Slecht and two others in a rebellious and mutinous riot. They were found guilty and taken to New York for sentence. Nichols, by advice of his council, on the 3rd of May, sentenced Heymans to be banished for life out of the government, and the others for shorter terms, out of Esopus, Albany, and New York. All these sentences of the burghers were subsequently modified, and the offenders returned to Esopus. Governor Francis Lovelace restored Roosa to favor and in 1669 appointed him and Louis Du Bois, two of the overseers for Hurley, formerly called Nieuw Dorp or New Village. “In 1673 he was confirmed as one of the officers at Esopus by Governor Anthony Colve, and described as Captain Albert Heymans, who had been prominent in the riot of 1667.”

Aldert and his family subsequently relocated to Hurley where he and Wyntje resided for the remainder of their lives. He died in 1678/79 and she died sometime after 1685 when she was recorded as securing a grant of 320 acres at Hurley.

Lineage
What is notable about Patricia’s lineage is that she is descended from Aldert and Wyntje on her father’s and mother’s side. Aldert and Wyntje had a son, Arie Hymansz Roosa who married Maria Evert Pels. They had several children including Wyntje Roosa (named after Arie’s mother), wife of Nicholas DePuy and they are direct ancestors of Patricia’s father, Alfred William O’Dea.
Arie and Maria had another daughter, Ariaantje Roosa, wife of Teunis Oosterhout and they are direct ancestors of Patricia’s mother, Grace Marion Chapman.

This lineage spanning 12 generations can be seen in Image #1. Note there are four American Revolutionary War soldiers represented here.

Heraldry
The governing authority for approving a Coat of Arms in America is the Committee on Heraldry of the New England Historic Genealogical Society located in Boston, MA. After reaching out to the Chairman, he responded by sending minutes of two meetings, in 1939 and 1940, that resulted in the approvals for Aldert and Wyntje. Interestingly, the application for these approvals was Marguerite du Pont Ortiz Boden (Mrs. Harry Clark Boden) of Newark, Delaware. She was a member of the du Pont family and was involved with many genealogical societies.

Reference Image #2 for Aldert and Wyntje’s approved Coats of Arms.

Summary
The confluence of separate lineages spanning 400 years and twelve generations is a genealogy treasure highlighted by the discovery of separate Coats of Arms awarded to Patricia’s 9th great-grandparents of the 17th Century and early Dutch colonists of Hurley. 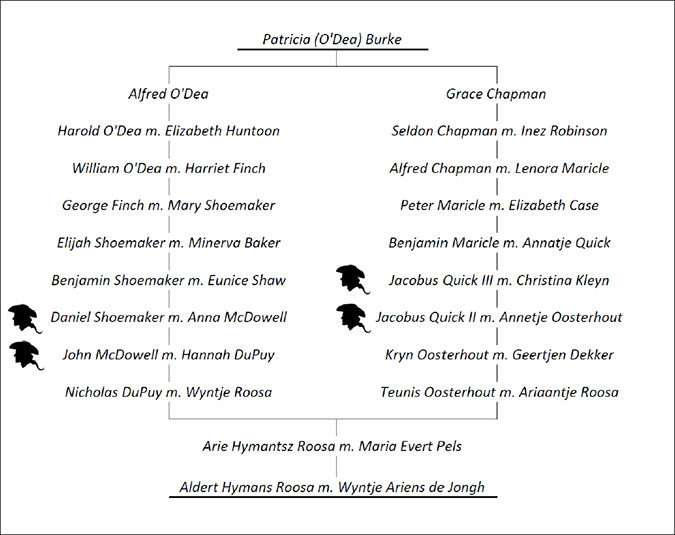 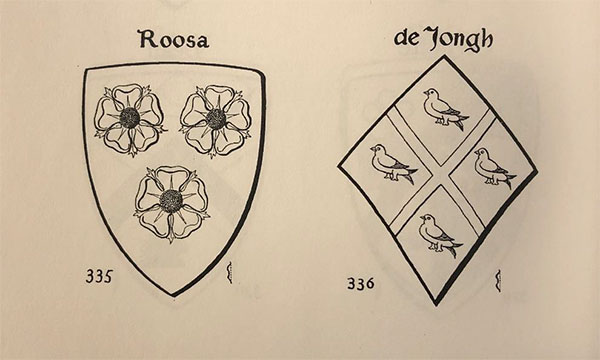 Image #2: From Roll of Arms published in 2013 by the Committee on Heraldry
Roosa: Gold three roses gules
De Jongh: A saltire between four martlets (tinctures unknown) 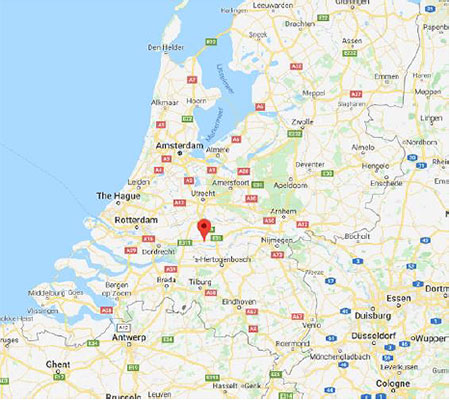 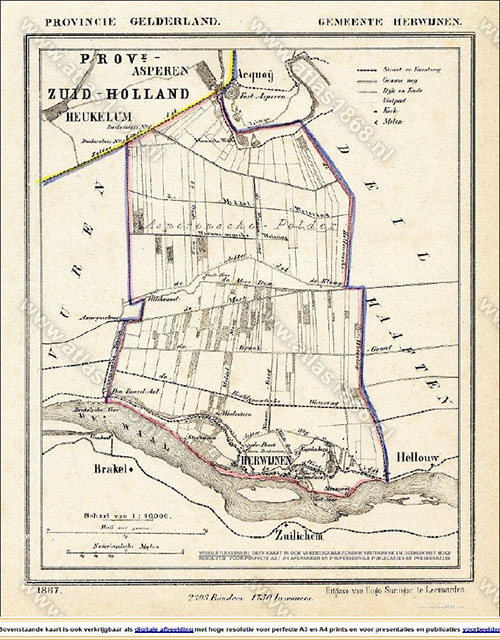 1867 Map of Gelderland with the Village of Herwynen