From the private papers of John Hofler—Past Associate Historian of the Town of Hurley
Courtesy of the Office of the Hurley Town Historian, David Baker

The Blizzard of ‘88 went down in the annals of weather reports as the worst storm to ever strike the eastern seaboard, but surprisingly, there was only about two or three feet of snow. The damage came from gale force winds that reached 60 MPH and left snowdrifts as high as 10’ to 20’. The storm started on Sunday morning, March 11, 1888 and by 7:00 O’clock there was 12” of snow. By noon it was up to 18” and the storm continued to rage until Monday midnight. The blowing snow reduced the visibility so much that it was impossible to see across the short distance from the barn to the house. To guide themselves, some farmers strung a rope between the house and barn.

The drifts reached as high as the second story windows, fences were buried out of sight, and roads were completely blocked making transportation impossible. Stages were stopped and trains were immobilized. In 1888 there were no self-powered snowplows, no self-powered vehicles that could truck the snow away. There wasn’t even a department to provide highway maintenance. Road clearing was the responsibility of the individual landowners. The newspaper reported that “….farmers were out in force today clearing up the snow blockade. Drifts 20’ high were encountered. Only the tops of stone walls and fences were visible.” Horse drawn sleighs were pulled over the top of the snow in an effort to break down the snow covering. Then the men had to use their snow shovels to dig into the drift. Hurley Avenue Extension had a 1200’ long drift some 10’ high that had to be cleared by hand by the residents of Hurley. 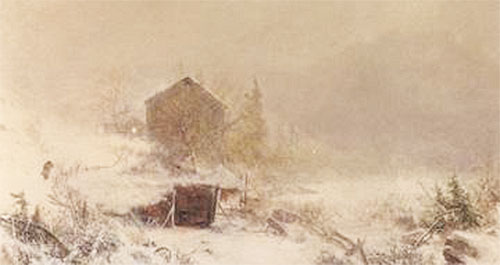 The storm created a phenomena rarely seen in this territory. The gale force winds, blowing from the north-west, had blown the waters of the Hudson River down toward the sea, and that, coupled with the low tide, drained the Rondout Creek enough that boats were grounded on the creek bottom. The ferry boat went hard aground, and the steamboat Norwich was keeled over to one side.
There was a sad incident related to the storm when it interfered with the preparation for a child’s funeral. The young child of Michael Tobin of West Hurley had died the night before the storm started. Arrangements had been made with a funeral parlor in Kingston to prepare the child for burial but the storm struck before he was moved to Kingston. After the storm was over the roads were still impassable for some days so rather than wait for the roads to be cleared six men carried the body to Higginsville Depot.

In Kingston, two children were found buried in a snowdrift. When rescuers dug them out both children had nearly perished. But with all the terror of the storm, there were no deaths or even serious injuries that could be attributed to the storm.

With all the problems the storm created there was a beauty to the scene after the gale winds had subsided, after life had started to return to normal. The scene across the flats looking towards the mountains as described by the Kingston Freeman “was as if a great white garment had been spread over the landscape. Fences were invisible. The houses were so covered with snow that they lost their identity. The snow clung to the trees, completely covering their branches and even the telegraph poles, with their white sides were almost invisible as seen through the wintry air.”  And when the U&D Railroad train finally came into sight it threw great clouds of snow into the air, creating another beautiful scene.

The Kingston City Horse Car, a trolley line that served the business district of Kingston, had to clear its own path through the snow. They plowed down the center of their tracks making a path for their cars that was quickly used by pedestrians. However, it was a never ending job what with the snow drifting onto the tracks as fast as it could be removed. The cars were crowded with people and strained the strength of the horses to their limit even though they attached four horses to the cars. In some cases the wheels of the trolley could not maintain contact with the rails.

The country stage coaches had to contend with roads made almost impassable by the drifting snow. If a stage made it to Kingston they stayed put, not daring to attempt the return trip. The Eddyville-Rondout stage became stalled in the snow near Wilbur and was about an hour getting out. The stage to Ellenville left the Rondout at the usual time but nothing was heard from the stage the next day. The only thing authorities could do was assume that the stage was stuck in the snow someplace and that the passengers were safe. The stage from Ellenville reached Hurley that Monday and stayed until the next day when the driver returned to Rondout with only one sleigh bob. [A bobsled normally had two sections coupled together. One section could be removed and used independently.] The Rifton stage made it as far as Rosendale but could go no further.

The railroad, too, found the tracks impassable. The railway cuts had snow drifts level with the top of the cut, and along the mountain slopes of the Highlands the drifts piled snow from the top of the bluffs to the river’s edge. Train traffic was brought to a standstill until the tracks could be cleared. Unlike the stages who could depend on farmers along the way to maintain the roads, the railroads had to clear the tracks themselves. One problem they faced was the scarcity of manpower. As an example, the West Hurley station reported that the tracks were blocked with about ten feet of snow, stranding a passenger train. A work crew consisting of three engines and 50 men left Rondout at 7:00 that morning to clear the tracks at Broadheads.